This month I released the second in my series of HTML5 mobile games, Higher or Lower, a card game that works on PC and mobile. (It would be so much easier if my games didn’t have to work on mobile and PC!) This post discusses my thoughts and feeling around this biggest development for me. 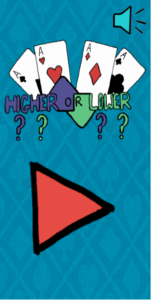 The response for Higher or Lower has been about what I expected. The few non-gamers I’ve shown it to played the game, said it was easy to understand. They also knew what to do and played it for a while. This is the kind of behaviour I wanted for this game, it’s not Breath of the Wild! I think, since I finished my first (proper) HTML5 Mobile game, Greedy Panda, I gained a lot of experience.  Particularly writing and what the HTML5 game market is looking for in terms of games companies would want to purchase.

In doing a card game (and HTML5 mobile games in general), I attempted to continue to create a fun, bright, colourful HTML5 mobile game (certainly more vibrant than other Higher or Lower games on Google Play). I think adding the Ouch Face in a manner similar (read copied) from Doom made the game stand out a little.

With this game I have been more mindful in getting some kind of financial reward. After all I spent a lot of time writing Higher or Lower. I have a spreadsheet of 20-30 companies and contact information. I spent an afternoon(!) filling in forms and emailing various companies about my HTML5 mobiles games. With a bit of flattery thrown in, asked them what they thought of my HTML5 mobile games. It may been too soon to tell though. I’ve already got a couple of rejection letters from armorgames.com and famobi.com.

I’m not too disheartened about famobi.com. Their technical requirements are insane! (text localisation, minimal user interface, unminified and unobscured game files – no way! As for armorgames.com…I made a HTML5 card game when most of their games are action games,  it was a poor fit. I’ll wait and see what the other companies say when they playing my game and replay. I will share those results here. It should be noted, that they were complimentary about the end result, which is really nice to hear. It’s easy to get praise from people you know. When strangers like your HTML5 mobile games, I think it means more

So I think my next goal is to (obviously) produce another game. I use Gamemaker Studio to make games. I have learned a lot about how the software works, even just realising how to use the built in troubleshooting tools to find out what the problems were. That was a major roadblock for me. Even trying to find out what the root cause for the problems I was experiencing actually were! Fixing problems is easy, actually finding out what they are…that’s the hard bit. I feel like I’ve gotten better at that so my next game should go smoother.

On the subject on what to make, that is a tricky one. I like to think that every game (but especially multiplayer games) made by developers is made with a little love and pride. Some of the things I’ve seen/played…don’t appear to be made with that much love or pride. I am super proud of Higher or Lower. It’s not perfect. There are some changes I want to make, but is a game under 4MB that you can play in a browser.

It would crush me if I spend a ton of time and effort trying to make the best multiplayer game I could and not have real people logged in to play it. I have an idea of a multiplayer game that would work on mobile and PC. It should be exciting to play, (or at least I think it would be) but there’s no guarantees people would play it! On reflection though, it’s wiser to make a larger but single player game. The risks and time required will be lower and I think I can compete with all the other game devs out there. I will spend the next couple weeks planning this next game. Hopefully I will have a skeletal structure of a game available for people to play, just so they can play it and let me know what they think.

I think the rules I have made so far are still robust enough to last – mobile friendly HTML5 game that works on both mobile and PC.