Another month, another HTML5 game dev blog post. I feel like I’ve made HUGE progression for the game, SteakHouse Chef. Specially compared to the previous months I’ve added animation for the characters, replaced the characters and am closer to having a consistent theme throughout the game.

I wanted to share the work of Donislaw, who is has generously added his name to the very small list of independent game developers who work in the mobile/HTML5 game development space who actually posts about how much money he has made from game development. To my knowledge there are only a few people who have actually done this:

So Donislow has joined a very small and elite group. I enjoyed our Reddit conversation very much.

I have now made big changes in terms of the game Steakhouse Chef. I am using the Google emoji list of characters as much as possible, just to give the game a unified style. Go through and amend some of the buttons to improve the aesthetic cohesion is quite a challenge!

One of the things I noticed is that, in the version on the left, the steak and the users just disappeared then reappeared somewhere else. It took me a long time to realise that things seem better when they don’t disappear and reappear. I said as much when providing feedback to a fellow indie game dev releasing his first game. Things need to be shown to come into existence and slowly leave existence. With easing of course!

I think with the GIF on the left, the movement of the people, slowly moving to the right of the screen makes things move real and in keeping with reality. I think the fact that the steak also moves with the user is important.

I think, from now all future goals for the game should be written here, so I can compare last month with this month more readily.

I don’t like the way the backgrounds are so static, I can’t help but think they should have come animation…perhaps not. I’ll have to see what works

I don’t have a single font that I am comfortable using in the game. I think that would be good to standardise to, again, have cohesion throughout the project.

Probably the oldest sprite in the game I’ve let to replace!

The timer doesn’t seem quite right. I like the shake to alert the user about the time running now but something about it isn’t quite there.

So ugly. Should probably be replaced with an emoji of some kind – 🏦, 💲,🤑

Hello September! I know it been quite some time since I posted. I did get married and go on my honeymoon but I’m hoping to get into more of a regular scheduled updating. In terms of HTML5 mobile game development, I have made some changes. I am still using Gamemaker Studio 1.4 , mostly because I still dislike GMS2 as a game development tool. I don’t think there’s any point changing until GMS2 gets significantly better. It also looks like I’m not the only one.

I am now working on a relatively simple HTML5 game that I also want to port over to Android with more features. My brother and I came up with the idea of a web based chef game where you cook steaks. I’ve recently finished the HTML5 prototype for the game but for the moment here are a few screenshots of the mobile game in action! I also want to be more open and more social about my game development – I think it would force me to work and post more – so I’ve posted a link of the prototype to Reddit for feedback. I’m more than a bit nervous! If you want to play this game the link is here for you 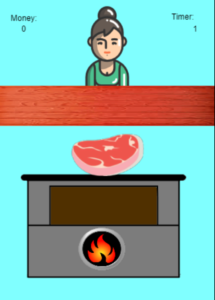 Hopefully you can see the kind of mobile game I want to try and make. I am thinking of making two ‘versions’: a HTML5 version and an Android version. Thankfully one of the great advantages of GM:S is that you can essentially have one code base and port the game you are working on from one platform to another quite easily.

The Android game version will be a fully realised game in it’s own right. I want to have the storyline of a chef who moves into a run-down dirty store then starts cooking for customers. I want this game to have subtle RPG elements in it as well. So for example:

The above is just an example and essentially you keep playing. Pleasing the customers in the game gets harder but your tools are better and you keep have to give your customers the perfect steak every time. I think, especially with the RPG elements, the game should have a reasonable lifespan, considering it’s a hyper casual game. If this all pans out well, this will be my first Android game I’ve ever made! I’m really excited to be able to say I’ve made a game that others can find and play and hopefully give feedback to me!

The HTML5 version will not have as many features as the Android version. This is because bandwidth must be considered when making HTML5 games. The more features I add, the larger the game and the more bandwidth consumed. HTML5 games should be quick to download and play, but as a consequence may be a bit less fleshed out due to the constraints. I want the HTML5 version of the game to be playable and fun but perhaps more focused on high scores and leaderboards than anything else. Pleasing as many customers as you can in a row and creating a leaderboard so people can see where they stand with their friends.

There are differences between the HTML5 and the Android version of my idea. It makes sense to complete the simpler HTML5 game version first. I can upload the HTML5 game to this site, Kongregate and itch.io and request for feedback. Maybe even try to sell the game and have it hosted on various websites. Then work on the Android version. Seems like the way to go.

I will post again soon with an update on how things are going, but I’m happy with my progression so far!